The Legacy of Lawyer Anna Brenner Meyers in Women’s History 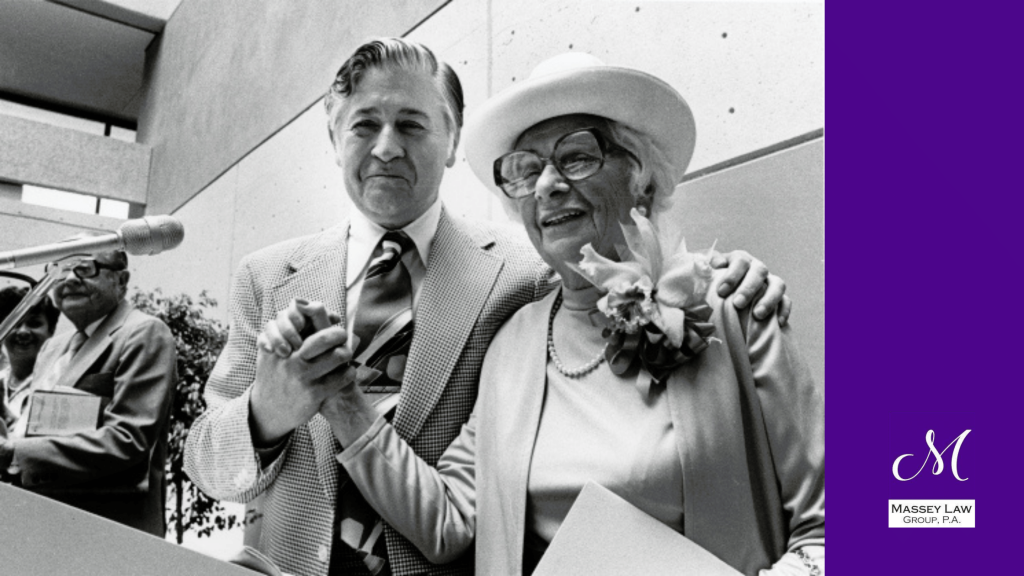 In honor of Women’s History Month, we are sharing the story of Anna Brenner Meyers: a trailblazer for women lawyers, a champion in the fight for educational accessibility, and a fierce advocate for gender equality within the legal profession.

Anna was born in 1896 in Poland and immigrated to the U.S. as an infant. After graduating high school at the age of 16, Anna worked as a registered nurse, a public-school teacher, and a social worker in New York. She became a citizen at the age of 29 and attended Brooklyn Law School, where she realized her true passion: the law.

Anna was admitted to the New York State Bar Association in 1934 and worked in private practice until moving to Miami, Florida, in 1936. There, she and her husband owned a bottled gas company. Anna took over full operations of this company after his death in 1939. Anna also continued to practice law and became a member of the Dade County School Board in 1953. Using her legal expertise paired with her experience as a former teacher, Anna fought fiercely for the desegregation of public schools and increased wages for teachers. In addition, she helped establish the Miami Dade Community College, Baker Aviation School, and educational television for at-home learning.

At a time when women in the legal profession were extremely uncommon, Anna fought to make sure future women lawyers would be given more opportunities and experience equality rather than the adversity commonly faced by women lawyers in her time.

In 1951, Anna Brenner Meyers helped found and was named the first president of the Florida Association of Women Lawyers (FAWL). Over the years, women attorneys through FAWL have actively worked to increase women’s equity in the legal profession. The current goals of FAWL are:

To actively promote gender equality and leadership roles in the legal profession.

To actively promote gender equality and leadership roles in the judiciary.

To actively promote gender equality and leadership roles in the community at large.

FAWL is a wonderful resource for Florida women lawyers to collaborate, network, and make a meaningful legal change. Massey Law Group’s (MLG’s) founding shareholder, Starlett Massey, and Senior Counsel Jennifer Codding met through the Pinellas County Chapter of FAWL (PFAWL). It is also because of PFAWL that MLG’s St. Pete office hosts the Collab at 3833, which features four women lawyers who collaborate to promote female empowerment in the legal profession. Members of the Collab include both Massey and Codding of MLG, Kristina Feher of Feher Law, and Liz Moneymaker of Ferrari, Butler, & Moneymaker, PLLC.

Gender Equality and The Law Today

While gender bias is now recognized as a legal concept, we still have plenty of work to do to achieve true equality. Thankfully, we can rely on the groundwork laid by trailblazers like Anna Brenner Meyers.

Anna Brenner Meyers is currently one of five trailblazer attorneys featured in The Florida Bar Diversity and Inclusion Committee’s “Path to Unity” Project. According to The Florida Bar, “The “Path to Unity” project is a traveling campaign that will tell the story of the Bar’s journey from its segregated past to the rich, multi-cultural organization that it is today.” As the project moves from city to city, volunteer lawyers will share the stories of the five featured lawyers to middle and high school classes and make meaningful connections to the history of the U.S. Constitution, our country’s civil rights history through the evolution of amendments to the Constitution, the implementation of federal laws, and U.S. Supreme Court rulings. The stories will explain how the modern civil rights movement has affected racial and gender equality as well as civic, disability, and sexual orientation rights.

Portraits of each of the lawyers have been painted by student artists and will be displayed at rotating Florida courthouses over the next two years.

To read more about Anna Brenner Meyers and learn about the other “faces of change” featured in The Florida Bar Diversity and Inclusion Committee’s Path to Unity program, check out their website. Over the next year, MLG is dedicated to providing a platform for these lawyers’ stories to be told promote involvement in the “Path to Unity” project – stay tuned!